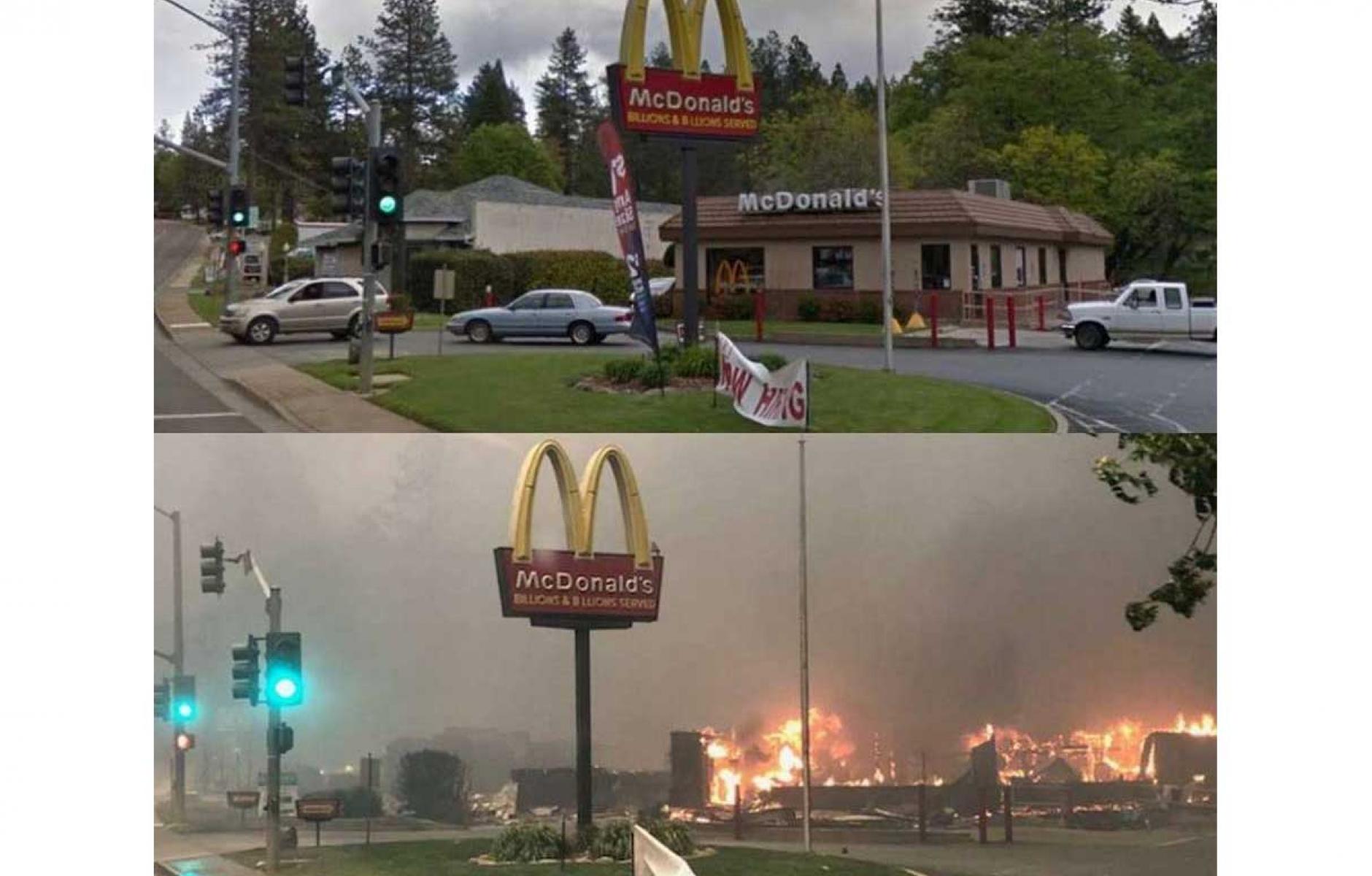 McDonald’s in Paradise before and after the Camp Fire. Photo: Oakland Fire Department. Image from Student News Daily.
Sustainability

How urbanism could help to solve problems like the Paradise disaster.
ROBERT STEUTEVILLE   &nbspDEC. 12, 2018

New urbanists have had tremendous influence on urban planning in recent decades—see 25 Greats Ideas of the New Urbanism. Often their work turns out to be prescient, but ignored. Such is the case with disasters like the Paradise, California, fire in November. The damage done to a city of 26,000 was the center of one of the bigger US urban disasters of any kind in recent years, and the deadliest and most destructive wildfire in US history.

In 2010, I wrote about a SmartCode Module by architect Martin Dreiling that offers practical strategies and tactics for municipalities to defend structures and people in communities at high risk of wildfires. Here’s the theory behind the module: Walkable communities can better defend against wildfires by creating common zones of defense around their perimeters. Agricultural uses surrounding a compact settlement—or at least areas where the potential wildfire “fuel” is controlled around communities—work better than sprawl patterns where thousands of buildings penetrate what is called the “Wildland Urban Interface” (WUI) in places of high wildfire risk, mostly in the West.

According to the Insurance Information Institute, “4.5 million US homes were identified at high or extreme risk of wildfire, with more than 2 million in California alone.” The Golden State has tremendous wilderness areas and the nation’s biggest population. Much of the state has a distinct dry, hot season. Cities like Paradise are nearly all in areas of high or extreme fire risk.

In the image above, you can see that development (the lines are roads), permeate the red hazard zones in a typical sprawl pattern. Paradise is a conventional suburban city built mostly since 1960 at a density of 1,400 people per square mile—which is typical of conventional suburban development. Although each house is built to meet fire protection regulations, this approach does not work well in a fire of such magnitude. Dreiling proposes, instead, a pattern of compact settlements with “common zones of defense.” For those of who are unfamiliar with urban-rural Transect terminology, T-2 refers to agricultural lands, or agrarian countryside. T-3 is the least dense housing in a compact neighborhood—essentially suburban but walkable to the town center. Here’s a quote from the module:

The Common Zone of Defense is intended to isolate wildfire from clustered development in the first place by generating a larger overall Zone of Defense than would be generated by sprawl development patterns. The goal is to eliminate the WUI by creating, instead, an Agricultural-Urban Interface (AUI) at the T-2 / T-3 boundary. The T-3 development then requires no different fire mitigation than any urban development. Thus buildings may be closely spaced with the understanding that building codes (health/safety codes) already require increased fire resistance for such configurations.

Below is a key image from the module. The top pattern, which consists of conventional suburban houses surrounded by high fire hazard wildlands, would be prohibited. The bottom three patterns would create common zones of defense. The traditional neighborhood development (TND) pattern with a zone of defense would be preferred for most development in the WUI.

Dreiling is not aware of any times that the module has been used in an adopted code. He is skeptical that it will be used in the current land-use political climate. “While I think the Fire Module is the right answer, I also think it has no hope of occurring as a retrofit policy because the opening move appears to the average folk as giving away real estate. People aren't scared enough to do that yet.”

While creating common zones of defense would require real estate, the land inside of these zones could be developed in a more compact pattern, which could boost land productivity overall. How many more Paradise-type disasters will have to happen before community leaders move to more sensible land-use patterns in the Wildland Urban Interface? Now is the time to put this idea forward, so communities are at least aware of this option.

To download the SmartCode Module Fire Mitigation in the Wildland Urban Interface, go to this page.