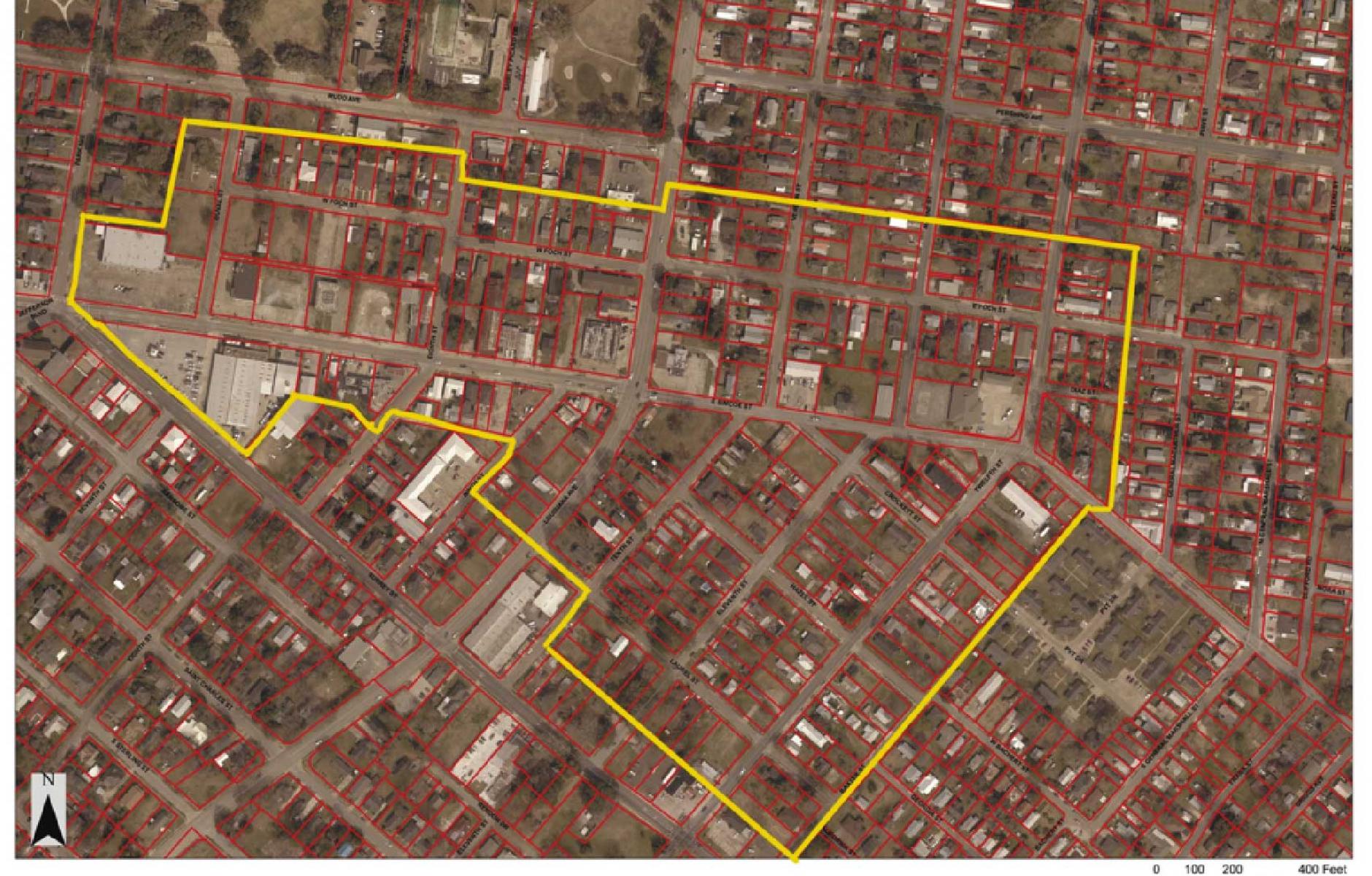 Pink Zone in Lafayette, Louisiana. Courtesy of the Project for Lean Urbanism.
Incremental and lean

A Pink Zone, an idea of the Project for Lean Urbanism, is an area of lightened red tape for small-scale projects. Pink Zones are designed to allow individuals with little capital to take action.
ROBERT STEUTEVILLE   &nbspNOV. 6, 2018

The modern regulatory system shuts people out who don’t have the capital to hire development attorneys, engineers, and/or architects to navigate the difficult processes, according to Brian Falk, who directs the Project for Lean Urbanism. One answer is Pink Zones, areas of lightened red tape for small-scale projects.

For the last two decades, much of Detroit has been an unofficial Pink Zone. The city didn’t have the resources to enforce all of the codes all of the time, and the city’s crises of population loss and ultimately bankruptcy fostered a less rigid approach to regulation. “I do think the city has developed a mindset where you want to get out of the way and allow organic development to occur,” Mark Denson, a top official for the Detroit Economic Growth Corporation, told JP Faber, author of The New Pioneers, a book on Lean Urbanism. Detroit’s regulatory atmosphere, along with cheap real estate, attracted entrepreneurs and urban homesteaders from across the US.

Now the Project for Lean Urbanism is working with cities like Chattanooga, Tennessee, Savannah, Georgia, St. Paul, Minnesota, and Lafayette, Louisiana, to create official Pink Zones in disinvested neighborhoods. Each Pink Zone will have its own protocols, but they generally involve a combination of streamlining regulations and coordinating efforts of property owners and residents.

On the streamlining side, the project team looks over regulations (“The Lean Scan”) to find hurdles that prevent people from building, for example, accessory dwellings—which should be legal and affordable from a bureaucratic standpoint. The same should apply to owner-occupants of duplexes, triplexes, and quadriplexes, Falk says, all of which can be funded the same way as single-family houses—through simple FHA home mortgages. Sometimes zoning codes need to be changed, or overlays written, to allow these developments. Sometimes the permitting processes need to be simplified or shortened for small-scale projects.

Another goal is for business owners to own the properties where the business is located. In other words, the proprietors can be their own landlord, which is another means to wealth creation. Training programs, like Incremental Development Alliance boot camps, can raise skill levels and awareness of opportunity and skills to make it happen.

Another tool for streamlining is to make pre-approved building plans available in Pink Zones. Builders can select from specific plans that are vetted by local officials and get a building permit immediately. Specific sites may also be pre-approved for development when a pre-approved building plan is used. Site-development requirements—for stormwater, for example—vary radically by municipality. Ideally, a very small development would be “under the threshold” that requires site-development approval, but that is often not the case, and the requirements can sometimes be tortuous. Two buildings with the same footprint should have the same stormwater requirements, for example, but some municipalities will have more stringent requirements if there are more units. The Pink Zone would seek to get rid of such discrepancies. Also, there is no compelling reason to require an accessory dwelling unit in a Pink Zone to have its own water or electrical connection as long as the water and electricity are effectively metered in the primary dwelling, Falk notes. To the Lean Urbanism way of thinking, such decisions should be up to the property owner, who may not even rent out the accessory unit (it could be offered to an elderly relative).

Sometimes major regulatory barriers are invisible—such as when any new unit must be sprinklered for fire protection and the sprinklering system must have its own connection to the water line to prevent mixing of stagnant water with potable water. This can be prohibitively expensive, making an ADU impractical, but there are far less expensive ways to prevent the water mixing—like a backflow preventer valve. Yet working around that hurdle may require the city to intervene with the water utility.

In a place where little economic activity has taken place for decades, streamlining alone isn’t likely to create more investment. That’s where the coordination of activity comes in, and the idea of the “meantime” activity. Say a main street property is vacant. Ultimately, the property owner would like to establish a retail store but the market is not yet strong enough to justify such investment. What kind of activity can take place in the meantime? Maybe it is just a weekly flea market, with tables set up in a parking lot. Maybe it’s a food truck. Maybe a shack or a shed could be put in place for a few thousand dollars. This investment, at a fraction of the cost of a full-scale operation, could help to prove the market and build a clientele base.

If there is a commercial corridor in the Pink Zone with multiple property owners and potential entrepreneurs, these efforts can be coordinated to strengthen the overall market. One could focus on retail, for example, while another could focus on food, and another could focus on entertainment. Such efforts involve some curation of businesses, along with branding, marketing, and management for the corridor. This could attract attention to the district and gain the interest of developers and businesses.