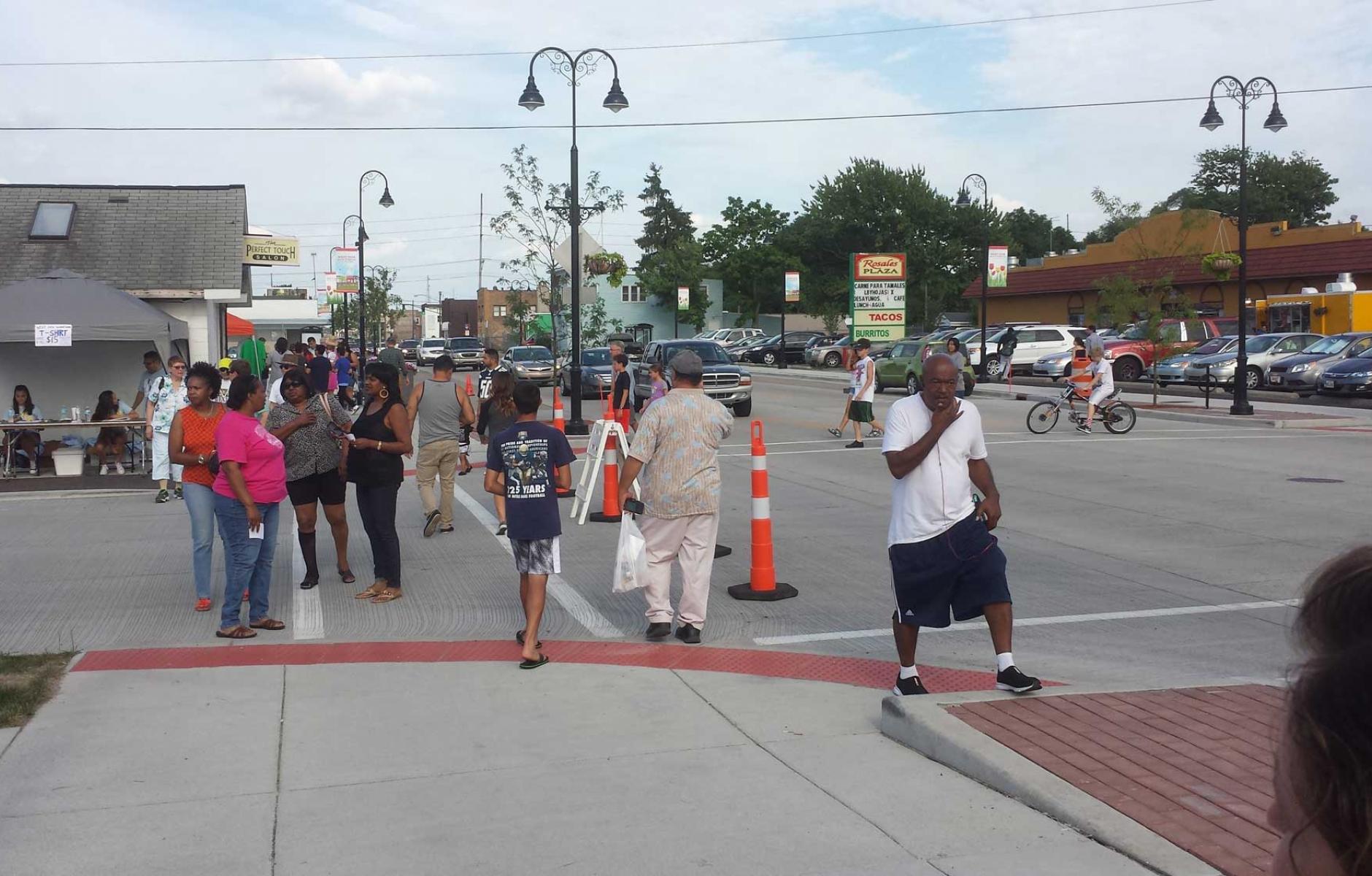 The West Side Main Streets plan is using limited resources to revitalize two struggling four-mile-long corridors of the post-industrial City of South Bend.

Until a few years ago, the two corridors—Lincolnway West and Western Avenue—felt like “truck-oriented highways,” plagued by poorly maintained and vacant properties. The project focuses on walkability, placemaking, façade improvement, better transit, parcel consolidation, and redevelopment to convert the corridors to a series of distinct neighborhood centers.

South Bend takes a complete streets approach to revitalization in general. The city’s “smart streets” initiative is credited with bringing over $90 million in new development to downtown. “There’s been more that’s happened in the last 36 to 48 months in downtown South Bend than has happened probably in the two decades prior to this,” Ed Bradley, commercial real estate developer, recently told The South Bend Tribune. Some old vacant hotels have been converted to residential, the first new office building in decades is under review, and new residential buildings are going up.

The downtown rebirth is necessary to revitalize the West Side, the hardest-hit area of a city that fell in population from 132,000 in 1960 to 101,000 in 2010—but has recently begun to slowly grow again.

The West Side has suffered population loss, vacancies, and blight. The housing stock is old, and many of the buildings need significant renovation. Home values generally range from $30,000 to $80,000—a range that does not support conventional mortgage transactions from financial institutions. This in turn leads to a situation where potential home buyers, wanting to invest in their neighborhoods, are shut out of the housing market unless they can afford to purchase the home in full.

On Lincolnway West the city used restriping, bike lanes, on-street parking, trees, property acquisition, and engineering work to make the area more appealing and pedestrian friendly. On Western Avenue, sidewalks, trees, pedestrian-oriented lighting, and street furniture were installed. The Western Avenue corridor has some active community groups that are drawing attention to the area, such as West Side South Bend, which promotes West Side Wednesdays.

A facade improvement program was implemented on both corridors. Twenty-eight grants were given from 2015-2018 for facade improvements on the two corridors, targeted at commercial areas. The 50 percent matching grants have totaled $611,957. These nodes have seen little or no facade improvements in several decades. The recipients are mostly “mom and pop” stores and other small businesses.

The city has also made zoning changes designed to spur redevelopment and improve streetscapes. The most effective has been to remove minimum parking requirements in commercial areas of the west side, according to Tim Corcoran, planning director. “Immediately when we made that change some businesses were able to do some things that they couldn’t before. One owner was able to move forward with a banquet hall, for example,” Simultaneously, the city put in place some basic form-based standards that are not too prescriptive, but ensure that new buildings will be built to the right of way to create a main street environment.

“Everything we do is with a complete streets mentality,” Corcoran says. “The planning department works closely with public works in designing streetscape. We are taking a half-acre of pavement out of an intersection this summer without reducing capacity. We are creating land and a development parcel that didn’t exist before.” The complete streets approach is citywide, but a good deal of the focus is on the West Side.

The city is in the early stages of trying to get new housing development on the West Side. A market study by Zimmerman Volk shows that the city’s south and west sides can absorb between 180 and 230 new “missing middle” housing types annually. On the West Side, that is most likely to occur near downtown. Lacking anchor institutions, the revitalized downtown is one of the few reasons for investment on the West Side.

The city has been acquiring vacant properties for redevelopment about a mile from downtown and also in other target areas of the West Side, but construction is likely to require investment on the part of the city. One possible strategy was employed in the 1990s by Notre Dame University in another part of South Bend. The university guaranteed a sale price to new home purchasers for a period of time. The program ended after values rose and the neighborhood revitalized.

The City plans on fostering partnerships to develop a small-scale pilot project as part of a broader neighborhood planning effort —Phase 1 is about six blocks with the potential for new public open space and a mix of housing types with a focus on missing middle housing. The project is located between Sherman Avenue and Harrison Street on mostly vacant parcels just north of Lincolnway West. This would involve financial institutions, developers and builders, neighborhood organizations and stakeholders, community development corporations, and elected and city officials in all aspects of the development process.

The West Side Main Streets plan won a 2015 CNU Charter Award for Torti Gallas and Partners and the City of South Bend for vision and implementation.