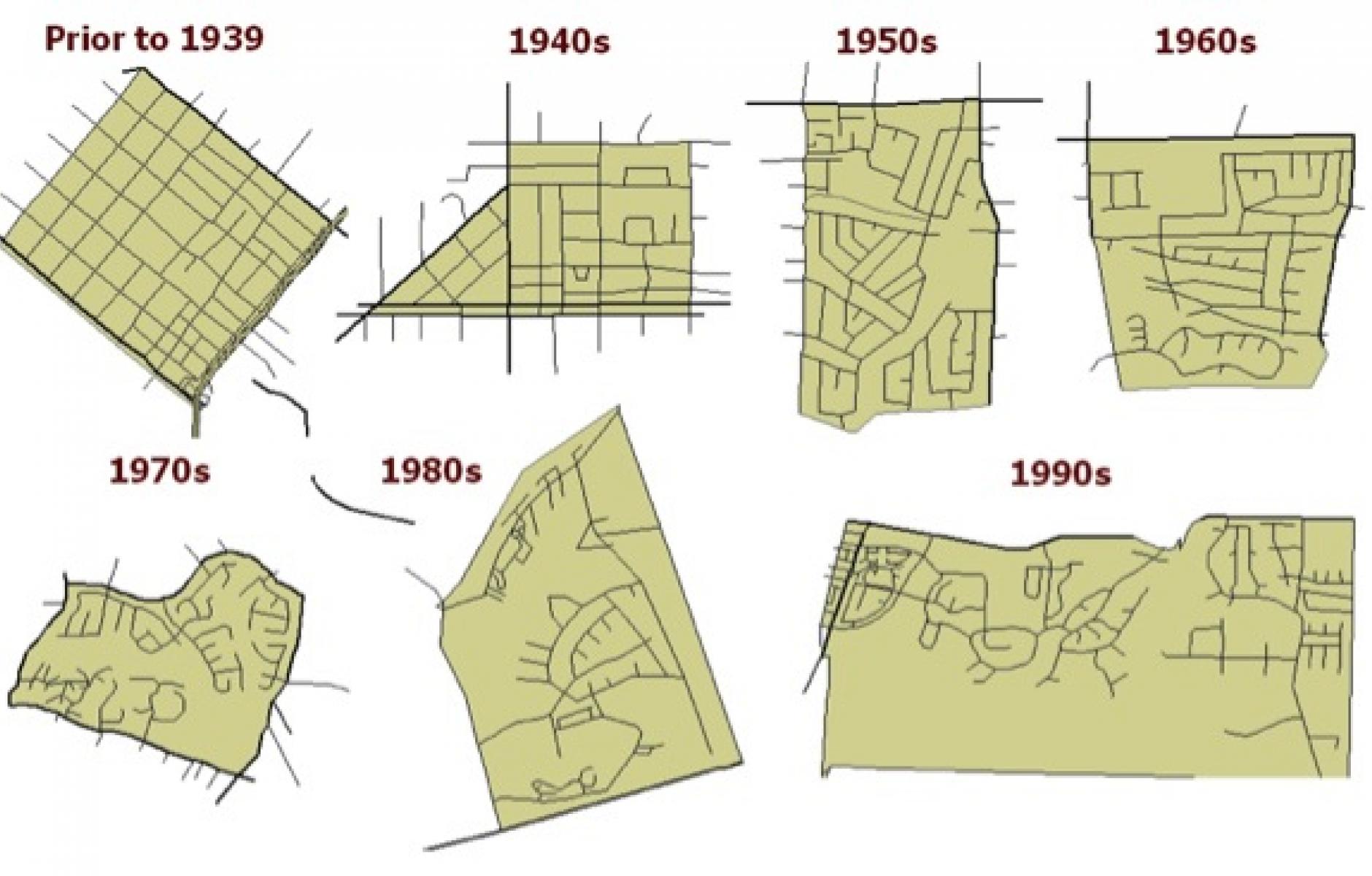 Why street grids have more capacity

I recently posted “The copious capacity of street grids” making the case that traditional street networks are not just better for walking, biking, and livability, but also offer far greater vehicle capacity. In the comment section, somebody posted a link to a long-forgotten talk by Walter Kulash.

Walter Kulash was the original traffic engineer who promoted walkable urbanism. In a presentation to the “Annual Pedestrian Conference” in 1990, Kulash explains the virtues of “Traditional Neighborhood Development,” then a nascent alternative to conventional suburban development.

Kulash delves more deeply into the “why” of walkable urban street design than I normally hear from other traffic engineers and transportation planners, even three decades later. The “why” is usually assumed to be obvious: “Complete streets” accommodate all users, not just automobiles. That is fairer and it diverts traffic to other modes such as walking, bicycling, or transit—thus freeing up street capacity. Advocates also emphasize safety—complete streets are safer statistically.

While this reasoning offers something for everybody, it runs into difficulty because of what is not stated—automobile traffic must be slowed considerably to make the road comfortable for people outside of cars (and the slower speed makes streets safer for everybody). Even with some traffic diverted to other modes, the fear is that driving times will rise and the travel experience will degrade for drivers, who are more worried about getting slowed down than the potential for a crash.

Kulash argues for complete streets in a more sophisticated manner. They outperform conventional suburban thoroughfares in every respect, even—especially—from the point of view of drivers.

While complete streets advocates focus on single streets, Kulash pays attention to the entire network. The key to the effectiveness and efficiency of traditional neighborhood design is choice. In a walkable neighborhood, the grid of streets gives everybody far more choices. Kulash uses the vocabulary of the time—“traditional neighborhood development” (TND), which at the time was competing against the dominant paradigm of conventional suburban development (CSD).

Everything Kulash says applies to all urbanism, not just New Urbanism. What’s more, research in the last three decades supports Kulash’s view of the effectiveness of connected networks of streets.

The traditional neighborhood street network is more efficient and has more capacity because it makes turns easier and it greatly reduces the need for complicated, multiphase traffic signals, Kulash notes. In congested conditions—at the beginning or end of the work day, for example, drivers can decide on the fly to take alternative routes, distributing the traffic and making trips shorter. These benefits come on top of the generally understood benefits of complete streets for pedestrians, safety, and multimodal travel. The article is very long—11,000 words. I offer a few short excerpts here:

Among the many advantages of TND are “Two-phase signals — these are signals that simply turn green for the entire approach, with no turn arrows. These are possible where there is a dense street network, because there is a much greater choice of locations for left-turn movements. The Conventional Suburban Development concept concentrates left-turn movements at a few major intersections, creating the need for multiphase signals. Two-phase signals convey a sense of small scale, to both drivers and pedestrians, that contrasts strongly to heavy-duty multiphase sequences. Two-phase operation permits a greatly reduced cycle time.

“A network of small interconnected streets has more traffic capacity than the same street area arranged in a sparse hierarchy of large streets. This superior capacity is unrelated to the reduction in travel demand or shortening of travel distances that also results form the TND pattern. These decreases in total vehicular travel are also important advantage to TND, but we need to carefully isolate them in our analysis of TND traffic. The feature that we are focusing on is that for a given amount of traffic demand (i.e., same number of vehicular trips) the TND will simply out-perform the conventional street design."

“The fundamental reason why a dense network of small streets  out-performs a sparse hierarchy of streets is that streets become less  (not more) efficient as their size increases. So instead of an efficiency of scale as the street gets larger, we experience instead a deficiency of scale.

“The reason is in the intersections. Intersections control the  capacity of any network, dense or sparse. Think about it — if it weren’t for the intersections, every street would have essentially the capacity of a freeway lane, ideally 2,000 vehicles per hour (vph) and eroded, on surface streets, by various friction elements to 1,500 to 1,600 vph.

"Let’s take a somewhat abstract example of two different street patterns that illustrate this feature of traffic flow. In the first example, typical of the Conventional Suburban Development, we have a single large intersection of a four-lane divided and six-lane divided arterial street: each having left-turn lanes and protected left-turn signals. In other words, a well-engineered major intersection.

"Let’s assume that this intersection is operating at close to peak-hour conditions, and that traffic service is beginning to be noticeably affected by the congestion. This corresponds to a level-of-service (LOS) ‘D’ at the intersection. This corresponds to traffic volumes of 3,000 vph on the six-lane street and 2,000 vph on the four-lane street, and turning movements of 300 and 200 vph, respectively, for the major left turn movements. The minor left turn movements are overshadowed, with respect to the signal time that they need by the major movements and are not significant in this analysis.

"The intersection described above is operating the limit of LOS ‘E.’ No further traffic can be added, in any of the major directions, without the LOS deteriorating to ‘F,’ or unacceptable. Now let’s put the same amount of traffic on the same amount of pavement, but on a differently configured road system — a pair of two-lane streets intersecting three parallel two-lane streets.

"In a corridor sense, that is, in the east-west and in the north-south direction, the total number of lanes remains the same as in the Conventional Suburban Development example. Also notice that the total amount of pavement stays the same. The radical difference between the two plans is in the number of intersections in each system — the TND hassix times as many as the Conventional Suburban Development.

The argument that Kulash addresses, between street systems that disperse traffic and offer choice (along with slower speeds)—i.e. walkable urban or TND—and those that concentrate traffic, restrict choice, and aim for higher speeds, i.e. drivable suburban or conventional street design, remains a current issue. Kulash describes in detail why the greater choice and traffic dispersion of connected street networks create efficiencies that allow more capacity. Small, frequent intersections are built at a human scale and are key features of the public realm of cities and towns. The density of people and activities in that kind of network allows for shorter trips and greater flexibility in all travel modes.

That transportation planners and engineers abandoned the grid all at once in the middle of the last century, virtually everywhere in the US, without scientific study, is a wonder that historians will continue to ponder. That connected street networks are not being built again as a matter of course is a current mystery and failure of the professions in charge of public infrastructure.