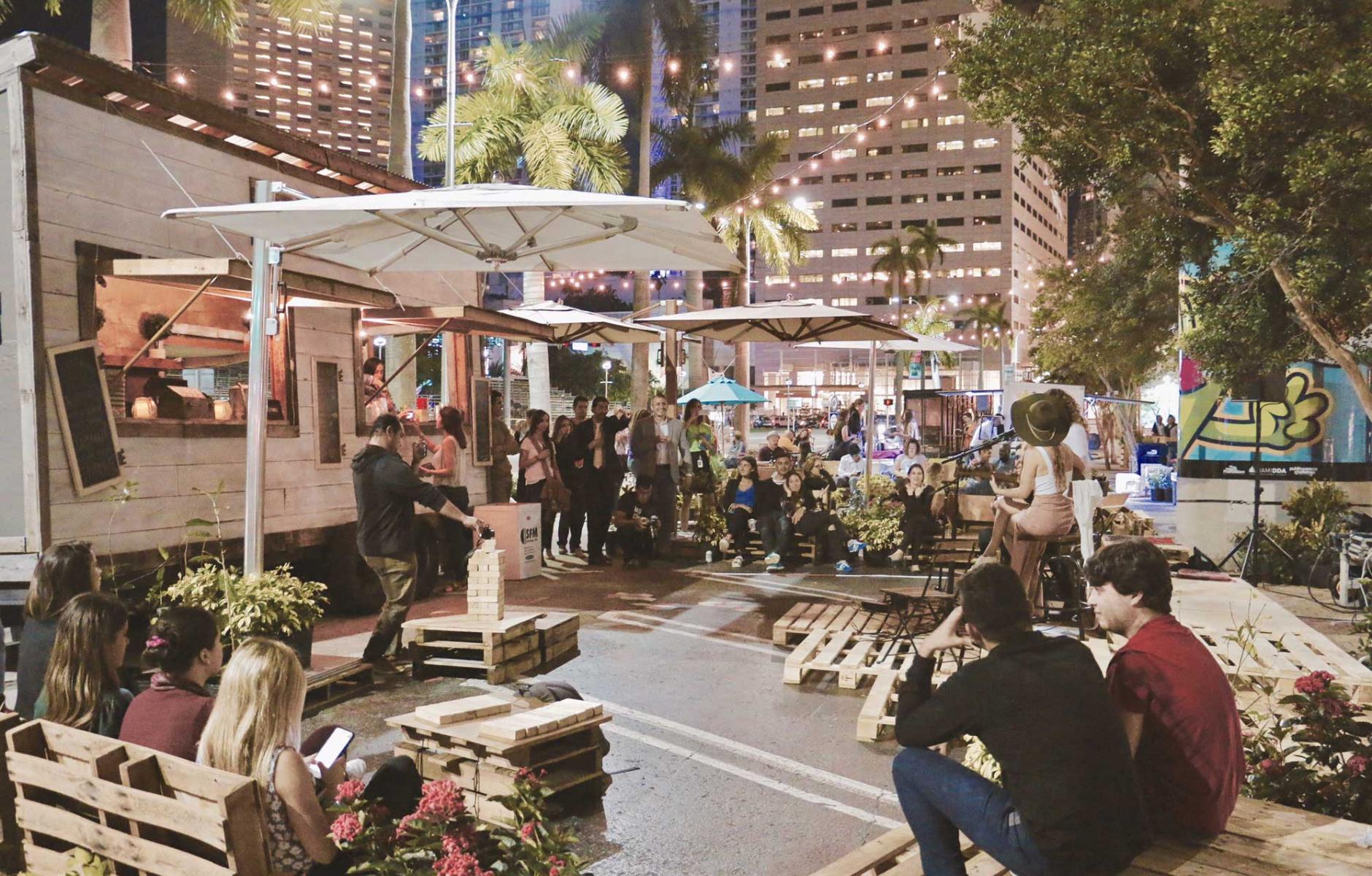 Community members enjoyed a “Books and Brews” event in the temporary seating area, which was created with no more than recycled pallets, nursery plants, and donated umbrellas. Photo by Andrea Lorena.
Tactical urbanism

A long-term plan to convert a series of parking lots to public spaces in the middle of Biscayne Boulevard in Miami was held up for years due to concerns about traffic and parking. The creative use of Tactical Urbanism is breaking the political deadlock for this important downtown thoroughfare—starting with a one-week event in 2012 and continuing in a three-week demonstration in 2017.

The recent project—which cost $200,000 total, including only $14,000 for construction—included an open lawn, a dog park, a children’s play area, and a seating area in one median. A second median featured painted asphalt and hanging lights and was used primarily for vendors, music, and dance.

Biscayne Green temporarily transformed the automobile-dominated thoroughfare, which cuts off downtown from the waterfront. A southbound travel lane was converted to a dedicated bus/bike lane, on-street parallel parking was added, and the surrounding crosswalks were enhanced with asphalt art—the first “art crosswalks” implemented on state-owned roads in Miami-Dade County. Street life surged during the project period.

Sixteen planned events and 30 spontaneously organized activities took place in Biscayne Green during the demonstration period. The project was visited by more than 23,000 people who participated in the events and who brought their families and pets to enjoy more passive amenities.

“Every response I heard was positive—people felt it was an evolution of what downtown should be,” says Ken Russell, District 2 Commissioner for the city.

In the wake of the demonstration project, Florida approved $400,000 to explore a permanent redesign. Political and community support remain strong.

“Biscayne Green was created to showcase not just what a safer Biscayne Boulevard could look like, but also how providing more public space for residents could transform Downtown Miami. For the pilot project’s duration, Downtown Miami was buzzing,” notes the project team.

Biscayne Green is a model for how planners and citizens can deal with 20th Century street infrastructure that divides cities and communities. Temporarily, Miamians experienced how a barrier can become an urban oasis.