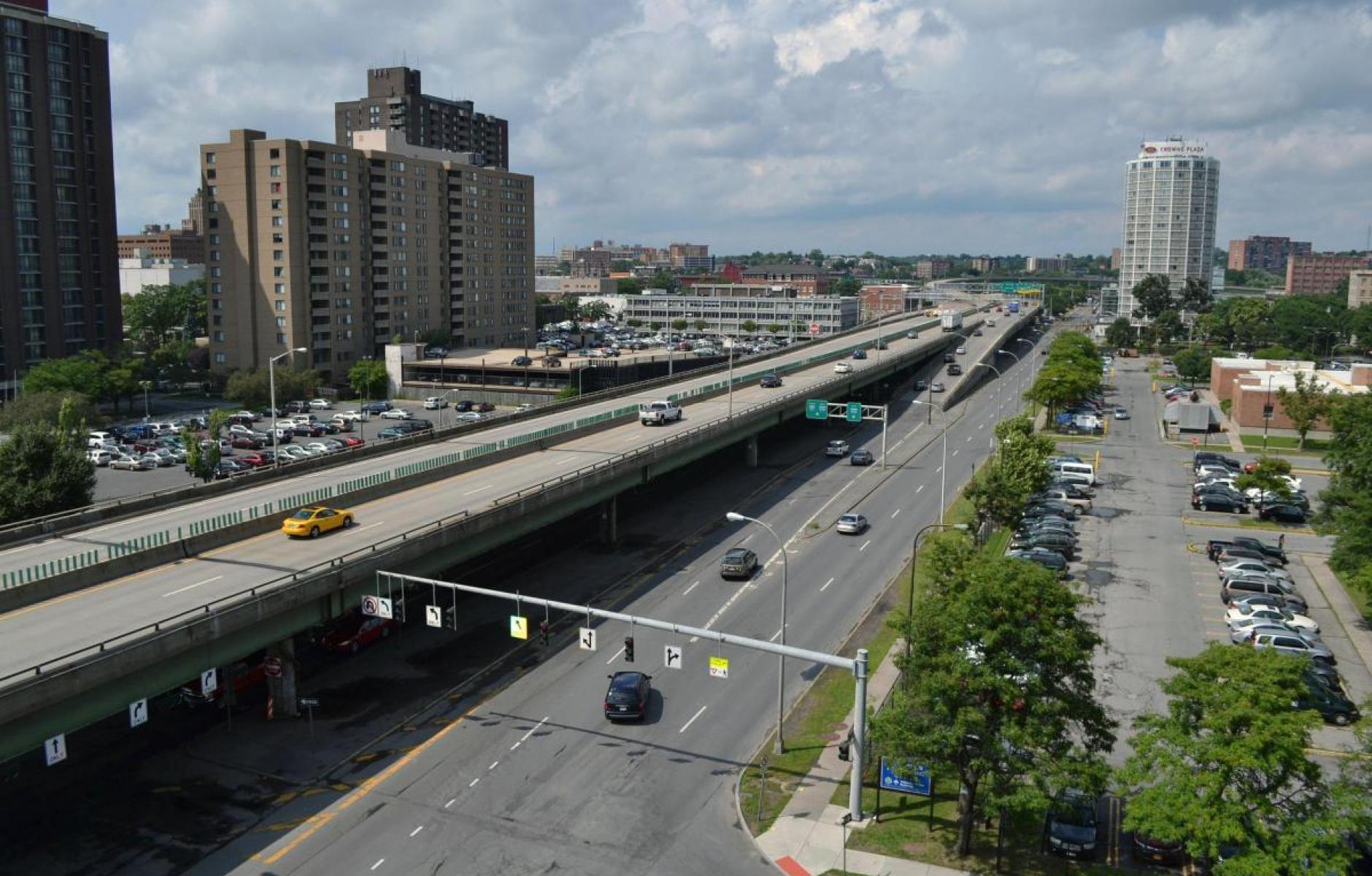 I-81 in Syracuse
Freeway transformation

A tunnel would cost nearly three times as much as converting the aging I-81 in Syracuse to a boulevard—as suggested by CNU's Freeways Without Futures report.
ROBERT STEUTEVILLE   &nbspDEC. 18, 2017

A new study shows that building a tunnel to carry Interstate 81 traffic through Syracuse, NY, would cost billions more dollars and take a decade to complete. The wisdom of transforming the aging elevated highway to a surface boulevard, as suggested by CNU's Freeways Without Futures 2017 list, is reinforced by the study.

The tunnel is nearly three times as costly as tearing down the elevated highway and restoring a street grid, while sending through traffic around the city center on I-481. A third option, rebuilding the Viaduct—which is nearing the end of its useful life—would cost only $400 million more than the boulevard, and the surface street would support far more economic development. The Syracuse Viaduct is one of 10 projects on CNU's Freeways Without Futures list.

For over 50 years, the elevated 1.4-mile stretch of Interstate 81 known as The Viaduct has cut like a knife through the heart of Syracuse, New York. For the urban neighborhoods in its path, I-81 has had the same effect as most urban interstates: it destroyed a historic African-American community, disrupted the flow of city streets, and paved over countless historic homes and sites.

Historically, The Viaduct’s construction forced the displacement of nearly 1,300 residents from the 15th Ward as it severed downtown Syracuse from University Hill and the Near Eastside. It created acres of abandoned property and vacant lots in what had been some of the densest parts of the city. As the path of displaced residents sparked white flight in other neighborhoods, the Interstate’s effects rippled out across the city.

Now, Syracuse faces a unique opportunity to replace the elevated viaduct with a boulevard designed to reconnect the city and reverse its urban decline. That common-sense proposal has the support of the mayor, governor, and city council. Compared to rebuilding Viaduct, teardown would save $400 million, preserve 24 buildings, and open up the downtown to more economic development.

“ReThink81, a coalition of planners, residents and other local stakeholders based in Syracuse, found that replacing I-81 with a boulevard would open up at least seven acres of land for potential development with almost $140 million in market value and $5.3 million in annual taxes,” according to the Tri-State Transportation Campaign. “In contrast, rebuilding The Viaduct ultimately could cause Syracuse to lose $85 million between increased taxes, significant takings of private land and buildings and depressed property values—as well as a reduction of more than $3.2 million in yearly tax receipts.”

Taking down The Viaduct “could be a transformative project that really jump-starts the entire region,” said New York Governor Andrew Cuomo in an August 2016 speech. “I-81 did a lot of damage — a classic planning blunder. ‘Let’s build a road and bisect an entire community. That’s an idea, yeah, let me write it down.’ "

Yet after the numbers pointed to the boulevard, many suburban backers of keeping a limited-access highway through the city center—especially State Sen. John DeFrancisco—insisted a tunnel be studied. The tunnel would cost from $3 billion to $4.5 billion, the study said, with a preferred option at $3.6 billion. Rebuilding the viaduct would cost $1.7 billion, and the boulevard would cost $1.3 billion.

The study cost $2 million and delayed the project a year. It is time for the New York State DOT to begin healing the city's downtown and core neighborhoods with a boulevard—the option that makes the most sense fiscally and economically for Syracuse.