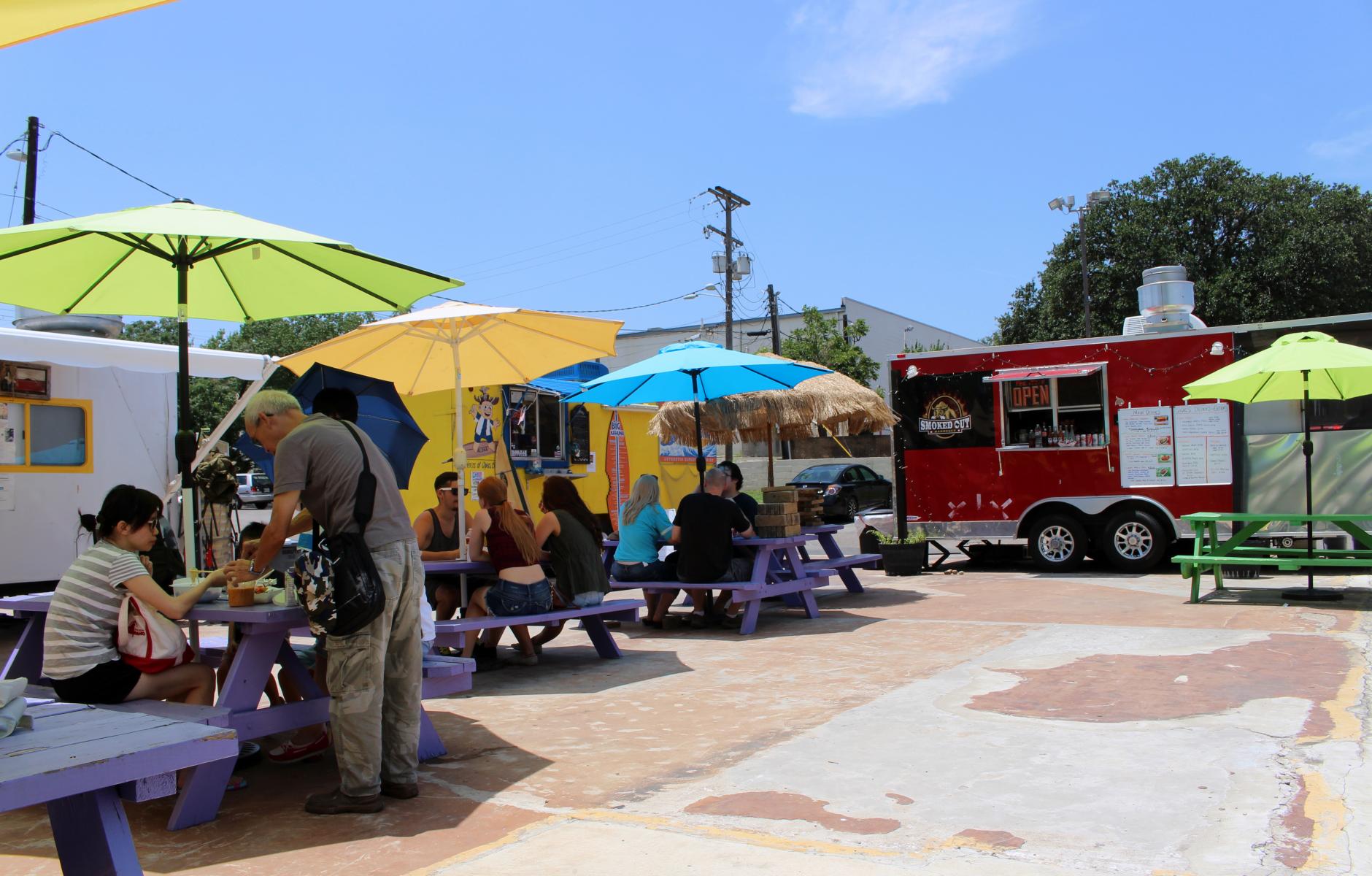 Form-coding and conversion of a one-way thoroughfare to two-way are advancing through public hearings in San Marcos, Texas—a mostly suburban city between Austin and San Antonio. In the meantime, development patterns are changing—some building owners are turning parking lots in front of buildings into plazas or new buildings that meet the sidewalk as a result of a changing planning and development culture.

This shift began one day in June 2014, when the City worked to re-envision downtown using "Tactical Urbanism." Workers converted two blocks of street from one-way to two-way traffic using temporary paint. An adjacent block was closed to create a farmer's market. Several "pop-up" parks were built in parking areas, lanes were narrowed, and a two-way temporary cycle track was installed.

More than 3,000 residents and visitors came to the site, experiencing the value of safer streets, local food, public spaces, and worry-free bicycling—all for a mere $1,300, or less than 50 cents a person.

Thanks to the exercise, the City of San Marcos now plans to permanently convert South Lyndon B. Johnson Drive to two-way at an estimated cost of $650,000. More importantly, city residents gained a firsthand understanding of what San Marcos—one of the fastest growing cities in America—could achieve with better urban design and land-use regulations.

The intervention kicked off a week-long charrette by Dover, Kohl & Partners, Town Planning and Urban Design Collaborative, Street Plans Collaborative and others to write a new land-use code for the entire city. San Marcos already has a downtown form-based code adopted in 2010 that is creating more pedestrian-friendly building frontages.

"Code rewrites and master planning typical take place in a board room and on paper, but not in San Marcos," said Jennifer Shell, city engineer.

San Marcos's downtown is already reviving, but placemaking and street improvements could kick that process into high gear. "Complete Streets," like the one that this event demonstrated, generate higher retail sales and provide a safer environment for motorists, bicyclists, and pedestrians," notes Matthew Lewis, former San Marcos Director of Development Services.

Additionally, the SMTX project—which won a Charter Award in 2015—could save lives. During the demonstration, operating speeds on the street slowed to 15 to 20 miles per hour from the usual 30 to 45 miles per hour, significantly improving safety for all users. Segregated biking facilities, like the ones debuted during the project, can even further reduce crashes. A fire truck even drove down the street—to prove that emergency vehicles would not be impeded.

"Only a Tactical Urbanism intervention" could have accomplished the kind of public education and permanent changes achieved in San Marcos, notes Dover, Kohl & Partners.

The team effectively engaged the city, the public, and transportation engineers. In the end, the City of San Marcos presented a recommendation of changes in full detail, with correct widths for sidewalks, travel lanes, and on-street parking—everything demonstrated, preparing the public for permanent implementation.