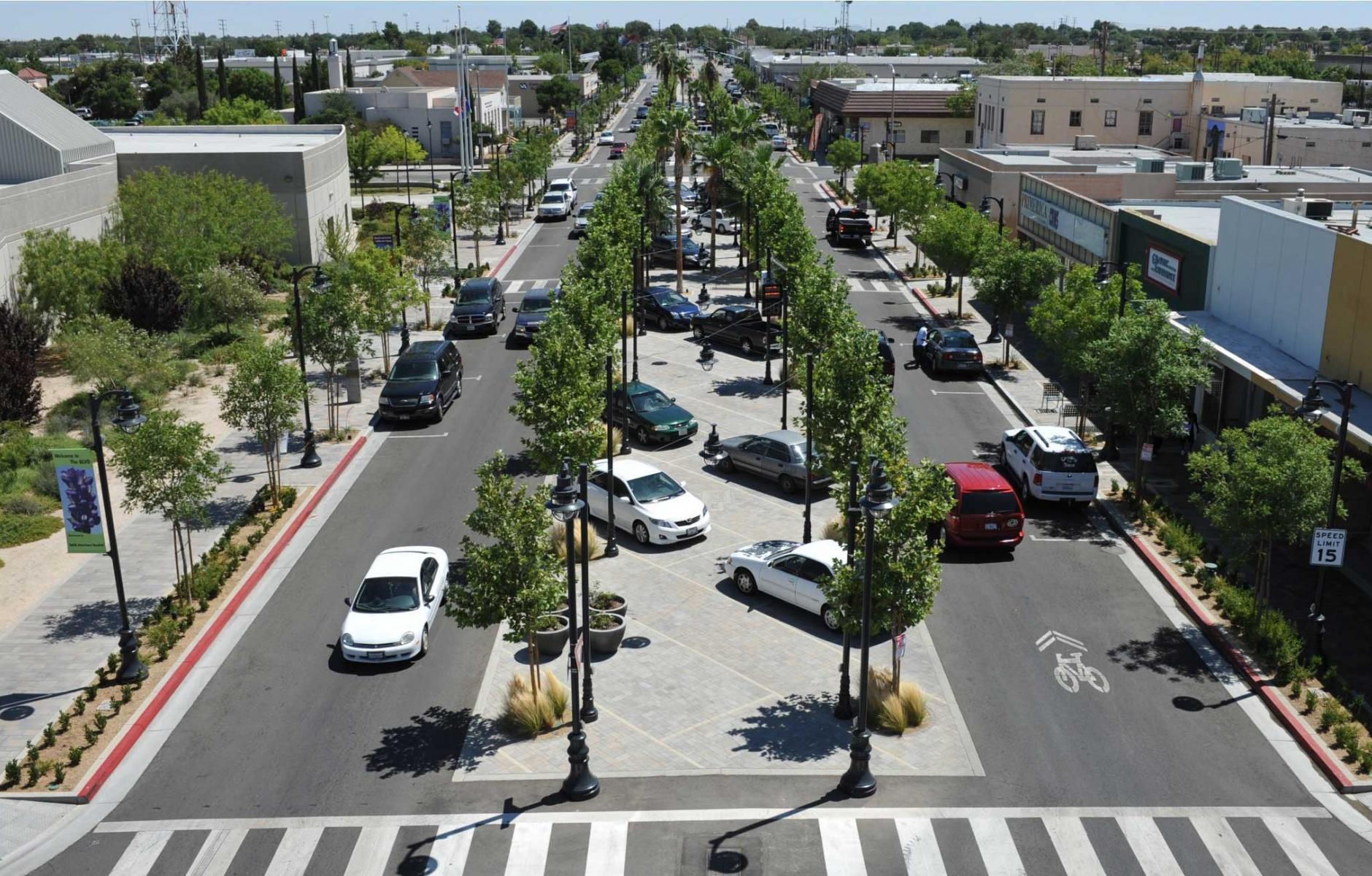 The nation has a large supply of mid-century neighborhoods that are ripe for changes that will make them more walkable and appealing to new generations of residents.
ROBERT STEUTEVILLE   &nbspJUN. 14, 2017

World War II has long been considered the watershed for automobile-oriented development. Suburbs were built prior to the war, but largely were mixed-use, walkable towns and neighborhoods of the “streetcar suburb” variety.

Yet this binary view — traditional neighborhoods before the war; suburban sprawl afterward — obscures important differences in suburban communities. Planners and theorists have debated how to fix the suburbs this decade, as discussed in books such as Retrofitting Suburbia, the Sprawl Repair Manual, and Reshaping Metropolitan America.

Suburban malls have been converted into walkable communities in well-documented cases, but this concept has yet to reach its full potential. For that to take place, the inner-ring, postwar suburbs built from 1946 to 1965 may be key. These neighborhoods, immortalized in classic TV sitcoms like Leave it to Beaver and Ozzie and Harriet, possess hidden assets that make them ripe for public and private investment today.

Twenty-six million housing units were built between 1944 and 1965, writes June Williamson in Designing Suburban Futures: New Models from Build a Better Burb. Most of the units from this era are single-family houses and are in decent shape after multiple renovations and additions. They house tens of millions of Americans today.

Here’s why the postwar suburbs are good candidates for repair:

• Better connectivity. Disconnected cul-de-sacs and isolated subdivisions are famously prevalent in the suburbs, but such conditions are more common in post-1970 suburbs. The streets in early postwar housing neighborhoods are mostly connected. Blocks are a bigger and streets more curved than in cities, but at least they link up. A lack of street connections is a huge barrier to the retrofit of later suburbs.

• Narrower, more walkable streets. The supersizing of streets in America was gradual and took full effect in the last three decades of the 20th Century. The postwar residential streets, however, are generally built to a scale that supports walking and bicycling. Some have sidewalks and some do not, but  low-volume, slow-traffic streets are often walkable without sidewalks. Postwar neighborhoods mostly need destinations to walk and bike to.

• Closer to downtown. The postwar neighborhoods in inner-ring suburbs are closer to jobs and transit than are later suburbs. The close-in location will affect real estate values and help to attract investment. Arthur C. Nelson argues that suburbs built before 1980 will hold their value better than those built after 1980.

• Demographic appeal. Millennials and Gen Xers with children may not want to live in cities due to considerations like schools, but they still want walkable environments. Postwar suburbs are increasingly diverse racially and economically, and that is also appealing to these groups. If they can be made walkable, the appeal could be strong. Baby Boomers, living in these neighborhoods, want active living as they retire. Walkable, mixed-use centers would enable them to retire in place.

• They are everywhere. America grew so fast during the first 20 years after World War II that nearly every metropolitan region has a plentiful supply of postwar housing.

• Incremental development opportunities. Redevelopment of shopping malls into town centers such as Belmar in Lakewood, Colorado, or Mizner Park in Boca Raton, Florida, required visionary developers with access to significant capital. Postwar commercial strips can be rebuilt incrementally in a series of smaller projects.

• Existing assets. Postwar suburbs have had 60 years in which to mature, create quality civic assets like parks and schools, and develop cultural institutions. Redevelopment builds on these assets and there is no need to create them from scratch — as new urban greenfield developments have done.

Belmar in Lakewood, Colorado. An early 1960s shopping mall was redevelopment into a downtown for Lakewood, Colorado. Belmar is anchored by a 16-screen cineplex, Whole Foods, Target, Best Buy, Nordstrom's, and a bowling alley—surrounded by 76 stores, 20 restaurants, and a block of artist studios. There are nine acres of urban parks and plazas—places that were lacking for the 147,000 residents of Lakewood prior to the transformation. Employers occupy 281,000 square feet of office space, with more under construction—along with a new Hyatt hotel. Belmar hosts a weekly farmers market, festivals, and outdoor music performances for the city. The economic activity and sheer, diverse living in Belmar dwarfs that of the mall that was replaced.

Columbia Pike in Arlington, Virginia, a 1950s commercial strip with a form-based code adopted 10 years ago, has revived with nine mixed-use projects in recent years adding 1,499 housing units and 163,000 square feet of retail, office, and other uses. The county is now expanding the code and plan and moving forward with a streetcar project (see the July-August 2012 issue of Better! Cities & Towns).

In Roanoke, Texas, officials borrowed $8 million to invest in a two-thirds-of-a-mile commercial corridor called Oak Street and adopt a form-based code. In less than 10 years, the corridor has been transformed with new buildings, historic rehabilitations, and a dozen restaurants, says Scott Polikov of Gateway Planning Group. “The eight million invested turned out to be a hell of a deal for everybody — businesses, property owners, and taxpayers,” Polikov concludes.

Bothell, Washington, is a postwar suburb that is quickly becoming one of the hottest communities in the Seattle region. The city had fewer than 800 residents in 1940, but achieved greater than 100 percent growth in the 1950s and 1960s — rapid growth in these decades is the hallmark of postwar housing communities. Now containing a population of 33,000, the city has experienced disconnected sprawl in more recent decades.

Bothell’s downtown has undergone dramatic changes in the past few years, according to The Northlake News. Redeveloping is centered on neighborhoods connected to a pre-war Main Street and an old commercial strip. These neighborhoods took shape in the postwar era. Freedman Tung + Sasaki (FTS) worked with the city on a plan to realign a state highway, revitalize the main street, and turn the commercial strip corridor into a boulevard with mixed-use buildings. Current development include a specialty grocery store, a variety of residential types, other retail, commercial, and office buildings, a new city hall, and a new plaza—all along the spine of a multiway boulevard that broke ground in the spring of 2016. Some buildings, such as an Art Deco school, have been adaptively reused.

“Applying a strong orderly and regular streetscape spacing structure (of trees, lights, etc.) to a large multiway boulevard creates ample opportunities to ‘capture’ and take advantage of the idiosyncrasies of the place — and show them off to add to unique placemaking and urban identity,” Gregory Tung explains.

A form-based code is important to ensure new development adds to a walkable environment, Polikov says. Roanoke was successful because of the combination of form-based code and street improvements. “Just doing the form-based code without the redo of the street would not have been enough,” he says. “Marrying them both together is the story.”

The existing businesses should be “grandfathered” so they can keep operating without being forced to change, Polikov says. As property values change and the economy turns over, new development will support the new vision, he explains.

The first 20 years of post-World War II development were qualitatively different from what happened in later suburbs — those with “power centers,” mega-schools, McMansions with three-car garages, and lots of cul-de-sacs. Later suburbs are sometimes the locale for retrofit, but the bar is set higher. High-quality transit service, such as a new light rail service or redevelopment of a 1980s park-and-ride near a commuter rail station, could be a catalyst.

The postwar suburbs have assets that will make for more revitalization opportunities in the next decade or two. These assets include connected, narrower streets and houses on smaller lots – often with one-car garages or carports, in place of the intrusive two-or-three-car garages common in later suburbs. Their commercial strips can be redeveloped with smaller increments of capital. Their inner-ring location is likewise attractive.

The scale of the postwar suburbs, housing a fifth or more of US population, is impressive. Making these neighborhoods more sustainable could keep urbanists busy for a couple of decades. They need public investment in the commercial arterials to make them more appealing and safe for pedestrians and bicyclists. State departments of transportation that have historically favored fast-moving automobile traffic often control these arterials. This barrier has begun to break down, as more states and local governments adopt design approaches that recognize other uses for streets.

Cities and towns with historic gridded streets will continue to revitalize. But living in the city is not for everyone, at all stages of life.  It’s important that the US develop sustainable, walkable suburban neighborhoods with plentiful single-family housing. The postwar suburbs offer the greatest opportunity to do so. Over all, these neighborhoods complement cities more than compete with them. The creation of more walkable neighborhoods in inner-ring suburbs will help keep some urban neighborhoods affordable in the coming decades.