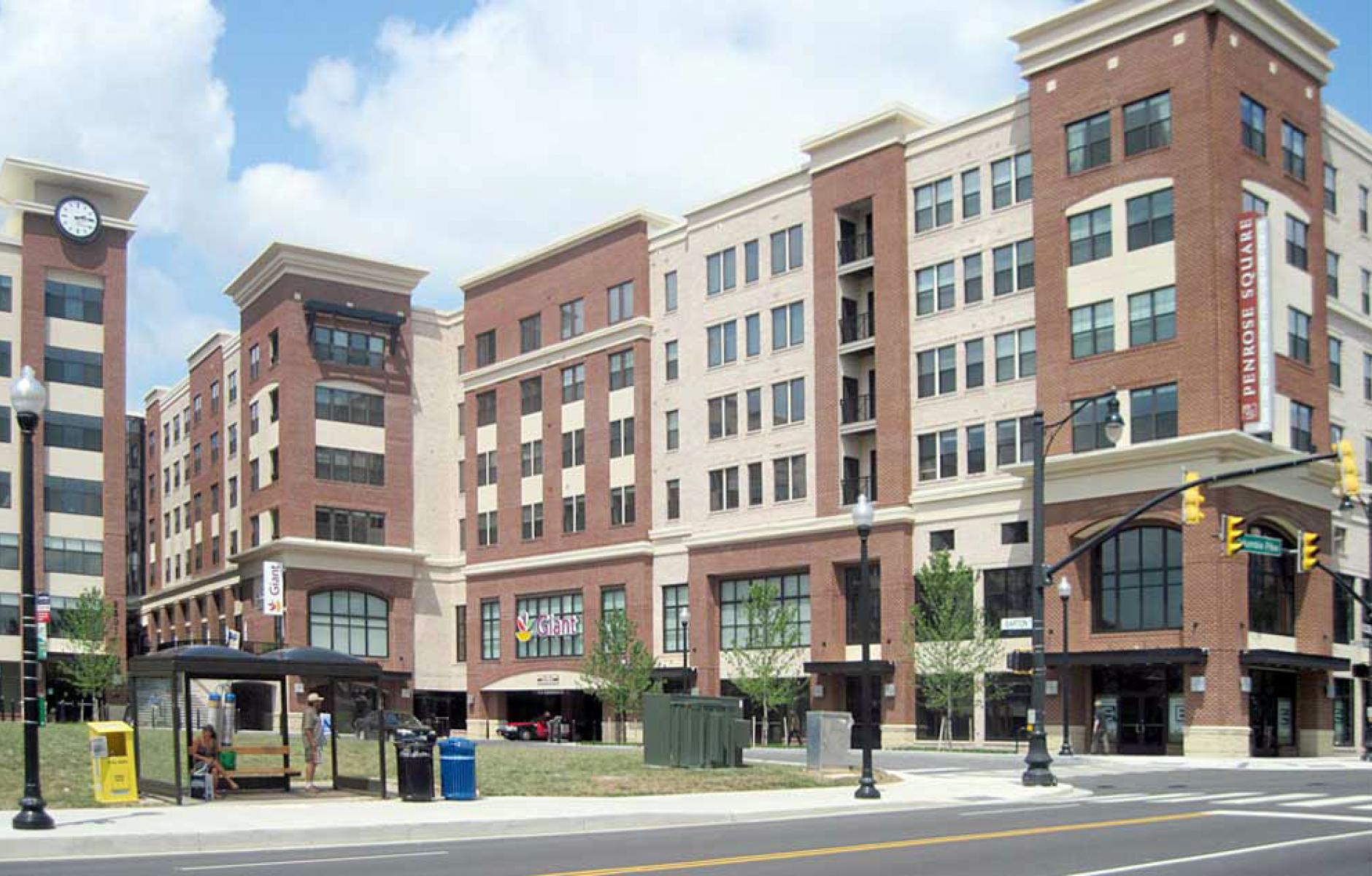 “Thanks to skilled designers, a clear, implementable code, and a truly capable client, this plan is getting built, and well.”
ROBERT STEUTEVILLE   &nbspOCT. 19, 2016

First built over 200 years ago as a toll road connecting Washington DC to greater Virginia, Columbia Pike now serves as a direct route to the Pentagon and other capital landmarks. Until recently, this Arlington, Virginia, thoroughfare was an aging commercial strip stifled by outdated zoning regulations and 1950s-era development patterns.

A public charrette in 2002 laid out a vision for Columbia Pike as Arlington's "main street" and identified widespread support for new urban development along the three-mile corridor—leading to adoption of an innovative form-based code. As a result, mixed-use developments were built, sidewalks were widened, and lighting was installed for pedestrian and bicycle-friendly purposes. “Thanks to skilled designers, a clear, implementable code, and a truly capable client, this plan is getting built, and well,” says Walkable City author Jeff Speck.

Following a successful follow-up charrette in 2011, the county committed to improved bus transit and the smart growth vision. More mixed-use developments are built and in the pipeline—all shaped by the code to transform this corridor into an appealing urban place. Noted planner Brent Toderian praises “the impressive, real-life success of the initial phases of actual design and construction.”

In addition to supporting walkable urban development along Columbia Pike, Arlington adopted an ambitious plan in 2012 to maintain affordable housing. Affordability is disappearing all over Arlington because the fast-growing, 229,000-person county is close to downtown Washington DC and its  high-paying jobs. The county has a goal to preserve more than 6,000 units on the corridor within 40 to 80 percent of the area’s median income to maintain diversity. By 2015, the county added more than 700 Columbia Pike units to its committed affordable housing inventory, supported by land-use and zoning incentives and financial tools.

Housing along Columbia Pike was originally built to house workers for the Pentagon in the 1940s, and today these housing units are occupied by multicultural residents. “It’s been called a world in a Zip Code,” says former County Commissioner Chris Zimmerman, now vice president of economic development with Smart Growth America. “There are 90 or 100 languages spoken, and immigrants from all over the world.”

By the turn of the 20th century, Columbia Pike itself was a fading commercial strip. Much of the county’s planning energy had until then focused on its two Metro corridors, where development pressure was high. Columbia Pike had tremendous potential, yet little redevelopment was taking place.

The zoning at the time fostered a “drivable suburban” pattern. Developers were not interested in negotiations to obtain higher densities that would allow public officials to demand improvements.

Zimmerman began talking to experts from around the country—particularly Peter Katz, author of The New Urbanism—who recommended a form-based code as a way to get the Pike moving in a different direction. Residents were attracted to the idea of the Pike as a mixed-use, walkable place. Arlington hired Dover, Kohl & Partners and Ferrell Madden to write the plan and code.

"There was a vision of Columbia Pike not simply being a commercial strip, a way of moving people from one side of the county to another,” says Zimmerman. “People wanted a main street serving the neighborhood—that’s what led to looking at the form-based code and related New Urbanism concepts. These were tools to make it happen.”