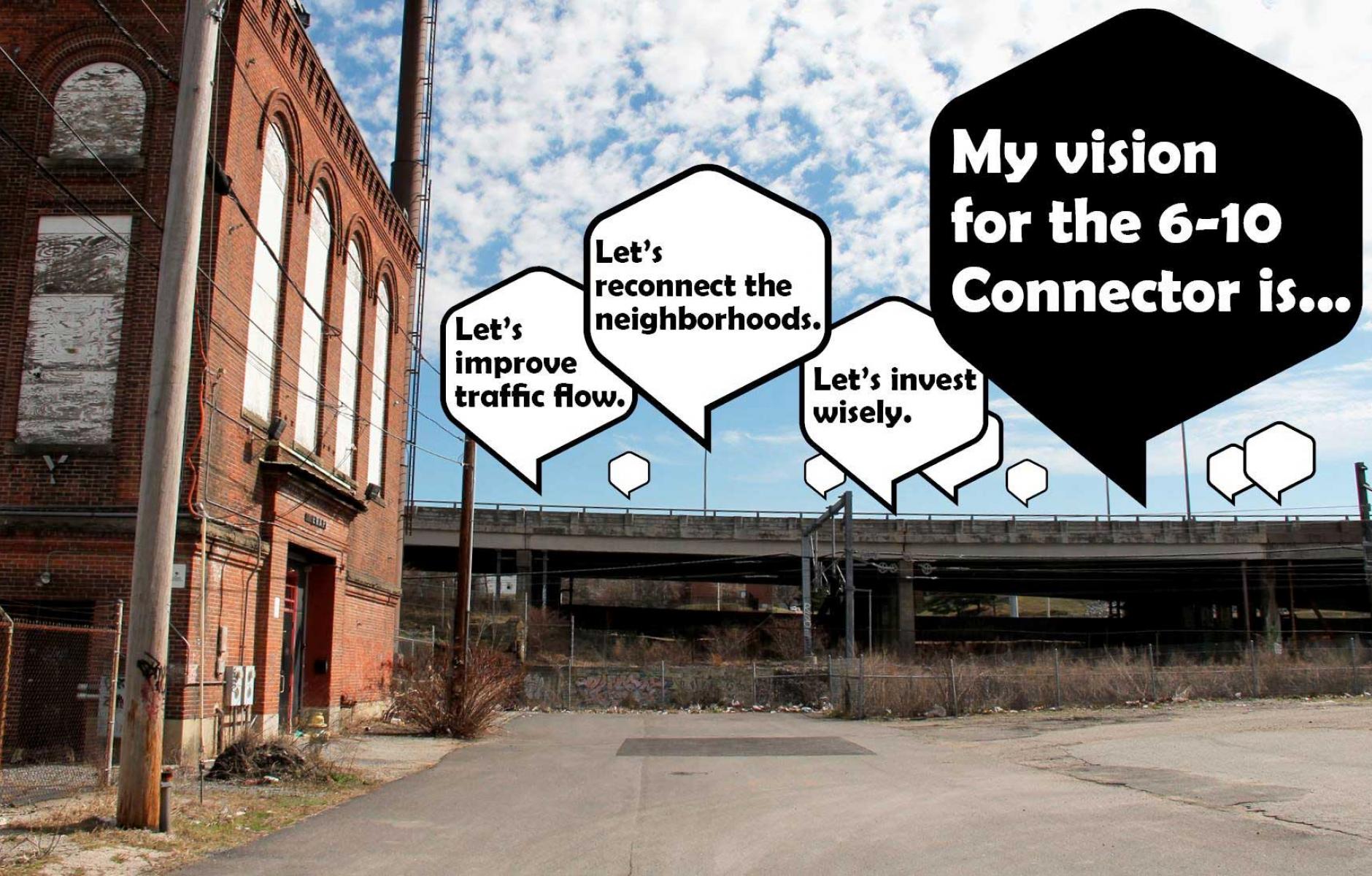 A diverse group is promoting "cost effective," place-creating alternatives to rebuilding an ugly freeway in Providence, Rhode Island. The current 6-10 plan "feels like they are screwing poor people, like it's urban renewal 201," says a Coalition member.
ROBERT STEUTEVILLE   &nbspSEP. 12, 2016

The city doesn't want it, the neighborhoods are damaged by it, but Rhode Island Department of Transportation ) RIDOT wants to rebuild a $400 million highway interchange that divides the West Side of Providence.

An urban boulevard, a more cost-effective alternative that would perform better economically, environmentally, and socially, was declared "dead" last week by RIDOT director Peter Alviti. The interchange of routes 6 and 10, limited access highways that join in a "Y" with about 10 bridges and flyovers, is falling apart due to lack of money for maintenance.

"Now the governor has announced that the big, ugly, stupid thing will simply be rebuilt the way it is now, minus the decrepitude but not necessarily the ineptitude," writes Providence blogger David Brussat.

For a half century, the highways have severely impacted the West Side, contributing to the downfall of a commercial district in the Olneyville, now a poor Hispanic neighborhood. Routes 6 and 10, their interchange, and a one-mile connector to I-95 divide about six neighborhoods on the West Side. The on-and-off ramps of the 6-10 interchange funnel motor vehicles into congested traffic-light intersections at rush hour.

"If you value the environment, social justice, and economic development, you can't rebuild the 6-10 the way it is," says Seth Zeren, development manager with RCG, a regional real estate firm and infill developer. The rebuilding would be expensive and create enormous maintenance liabilities that the state has no money to cover, he says. Not rebuilding could open up hundreds of acres to taxpaying private buildings.

The Coalition has significant "process concerns" because of the lack of transparency and public input. "This feels like they are screwing poor people, like it's urban renewal 201," Zeren says.

About six months ago, the state was moving in another direction. Six million in federal dollars were available for shoring up the bridges in the short term while planners looked at long-term options, such a boulevard connecting to I-95 and downtown, Zeren explains. But now short-term funding has disappeared, and citizens were jolted by the announcement of the fast-track rebuilding option. RIDOT is dusting off old plans and employing a dated environmental impact statement.

If the bridges are truly a hazard, Zeren wonders why they don't just close the Interchange. This will create congestion, but so will a four-year reconstruction project. The long-term fiscally responsible solution is a surface road that eliminates bridges, he says.

The story sounds like a metaphor for our nation's "infrastructure crisis," where politicians and departments of transportation call for more spending regardless of whether particular projects makes sense. A recent Strong Towns article posed this question: "How do we get beyond the simple propaganda equation of 'Spending Money on Infrastructure = Jobs and Growth' and make investments that actually make us wealthier?" The 6-10 Connector will make no one wealthier but concrete firms, pavers, and large engineering firms. A better strategy would let the people and city benefit from a more intelligent plan. Here's the press release from the Coalition:

The Fix the 6-10 Coalition … is appalled by Governor Raimondo’s announcement that RI DOT will be proceeding to immediately reconstruct the existing Rt. 6-10 highway through Providence’s West Side.

We agree that the 6-10 Connector desperately needs to be fixed. But let’s get this right. We’re afraid the Governor has been given some very bad advice from her Transportation team.

Investing $400 million of Rhode Works money, funded with long-term debt and increased tolls, to reconstruct the connector “as is” does nothing to address traffic congestion--or public health, climate change, economic development, or the state’s long-run fiscal health.

This will be among the most expensive highway interchanges in the world; with no plan to pay for long-term maintenance.

Every dollar spent on this road is a dollar not spent rebuilding a bridge elsewhere in the state, for a road that Providence doesn’t even want. We hope that other cities and towns realize what’s at stake and contact their representatives and the Governor’s office.

Replacing the 6-10 Connector as is will do nothing to improve traffic. Leaving out even a connection between Route 10 North bound and Route 6 West RIDOT dooms Olneyville to traffic congestion for generations. RIDOT has not conducted a thorough traffic study or model of future demand made public -- no one has done their homework.

There are other options. For example when I-95's Pawtucket River Bridge was failing, the state didn't hesitate to ban heavy trucks from using it until the replacement was complete. RIDOT can lengthen the lifespan of the 6-10 bridges by banning heavy vehicles and closing lanes, restricting cars to those lanes best supported by the existing infrastructure. Doing so would give planners and engineers more time to develop a new design to replace the current one, which fails every user type as well as the neighborhoods through which it passes.

We believe that a surface boulevard would actually improve commuter experience by solving problems getting on and off the road where backups occur while allowing us to meet some of the many other goals for Rhode Islanders. But so far RIDOT has resisted any effort to explore lower cost, more sustainable solutions.

The State has not done any adequate community engagement work. Indeed it has run roughshod over the City of Providence and dozens of civic organizations who have been seeking to create a new vision for the route that serves the State’s long-term interests. For example, this road will last 50 years; if rebuilt how will the state achieve its climate change emissions reduction targets?

We challenge the Governor to make her decision again after walking from Olneyville to the West End and experiencing the terrible toll this antiquated design inflicts on the City and State.

This is an embarrassment for the State of Rhode Island. We are trying to reinvent the state’s economy for the high-paid jobs of the future… but keeps coming up with rehashed failed ideas from the 1960’s. Let’s not make our children and grandchildren pay for a terrible highway in Providence, which Providence doesn’t even want.

To learn more and get involved, visit fixthe610.com or find us on Facebook."