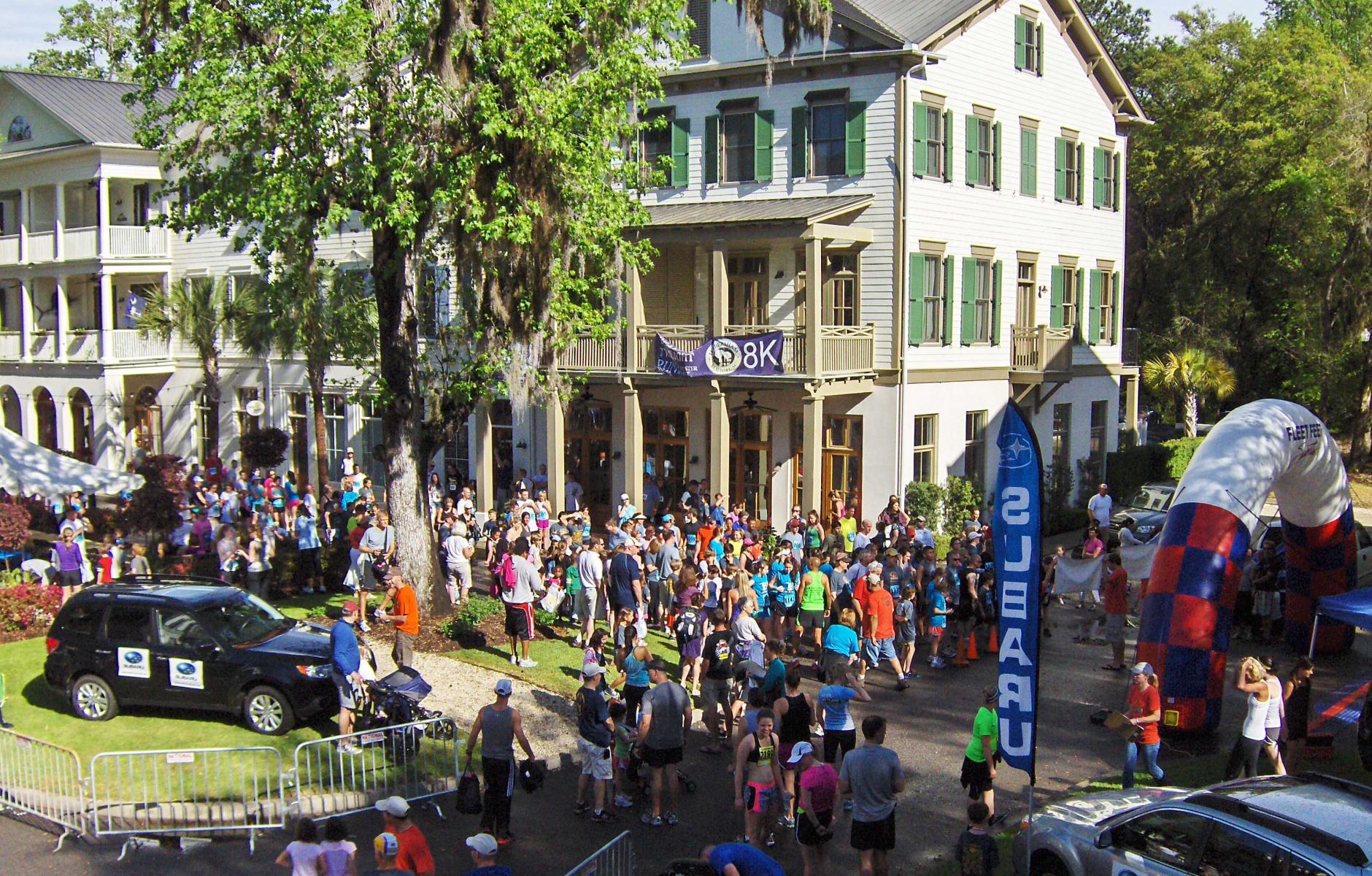 A recent article from coastal South Carolina tells the story of gated golf course communities where owners are selling their lots for a dollar, sometimes in tax sales, to get out from under heavy homeowner fees on properties that remain vacant.

This problem was predicted 18 years ago by new urban developer Bob Turner of Beaufort, South Carolina. In a paper, Sustainability Through Design, Turner pointed out that low-density developments spread too many amenities over too few homeowners, creating an unsustainable burden. New Urbanism’s higher density and more efficient infrastructure makes it more financially sustainable in the long run, Turner said. Instead of a clubhouse with restaurants, New Urbanism offers a main street with private businesses. Instead of an expensive golf course, New Urbanism provides parks, playgrounds, and schools that serve people of all ages.

The problems of golf course communities will be even more pronounced in age-restricted developments, he predicts. “History has proven that for a society to be sustainable there must be a diverse population within that society,” he wrote in 1998, and that rings true today.

At the time, Turner had already built a traditional neighborhood development (TND) with Vince Graham and infill housing in Port Royal, South Carolina. In 1999, Turner launched Habersham, a TND in Beaufort County, South Carolina, now in the final phases of construction. Recently Robert Steuteville of Public Square asked Turner about how Habersham survived the housing crash, the future of TNDs, and current development trends. Public Square questions are in boldface.

Can you describe Habersham and how things are going there now?

It is a mixed-use TND. You’ve got condos, apartments, townhomes, single-family, a little village center, mixed-use buildings in the village center. We are in a destination retirement market, predominantly. There is not a lot of job creation in the area—nevertheless, we are fortunate to have a lot of young families in Habersham. The market is generally Boomers trying to relocate to the South.

We’ll have about 950 units at buildout. We sold about 750 of those units. We have a total of 460-470 buildings constructed. The rest are lots that have been purchased and are going to be built on. We are finishing up the original project.

Can you describe the town center—what that looks like and how that is different from what you might find elsewhere around the area?

It is more of a smaller village feel than an urban center. We have live-above rentals, people who can have a live-work lifestyle. We have a variety of businesses including restaurants, dentists, a workout facility, a spa, a small grocery that is connected to local farmers, a hair salon, an antique store—just the basic needs stuff and destination retail.

Recently there was publicity about the Beaufort golf course communities. Why are these developments apparently failing?

It was somewhat predictable. As these gated, resort communities, with golf course amenities and clubhouses, age they become super-expensive to keep up and maintain—especially if they are smaller and the revenue to fund the amenities is spread over fewer homes. Then if the project gets into trouble, they leave half of the development to carry that tremendous cost burden. When the market crashed, it escalated that situation. People started realizing that “I own a lot and I am paying $15,000 to $20,000 a year to maintain a club that I never use because I am not even living there.” Those people started trying to get out from under but they were locked in by covenant to pay. Eventually, their only choice was to give the lots back to tax sales. They walked away and hoped somebody would buy the property. But people realized they were buying liabilities, so at the auctions nobody would touch these lots that were worth, at one time, maybe $250,000 to $300,000. It became a huge conflict between those needing to fund the golf course amenities and those who didn’t want to pay. This conflict has still not worked itself out and I don’t know that if ever will.

At Habersham, we have amenities. We have tennis courts and a pool. Even though these are private to the neighborhood, we designed them with the intent of a public use. We kept them simple—very easy to maintain. Our goal was to always have our dues reasonable. Golf is a super-expensive amenity and the market for golf is declining. Millennials are not into the clubs and they don’t have time to play golf.

You foresaw this 18 years ago. Were you proven right and has the New Urbanism, in a sense, been proven right?

I think so. In Habersham, we have a lot less land to take care of and a higher density of people paying. If the density is higher, you have so many more people per mile of road. For every lot in a conventional development, we have three lots paying for the same amount of road frontage. It just seemed to make sense. The other idea is that in a new urbanist community you are able to shift gears and target different markets. As the market changes you can shift to a lower end or a higher end. These other resort-type communities are all monolithicly priced—it’s very difficult to go in with new product on a huge lot and build smaller homes. Some of these projects have covenants with square foot restrictions.

Are there national implications for this golf course community story?

It’s not just golf, the bigger implications are the age-restricted communities. As people age out of those places, the lifestyle is not what the generation coming in behind them wants. And they will inherit these homes, and the dues that go along with them. You will see a ton of stuff hit the market and potentially tax sales. There are successes in age-restricted communities—The Villages in Florida, for example.  They have a dense population to support amenities and they built some great village centers. But some of other ones that are more gated and restricted and don’t have an urban center or village center—you wonder what the millennials will do when they inherit the house. Can they sell them? And the millennials may not even be old enough to live in the house.

Why did you choose New Urbanism, and how did the principles of NU lead to success at Habersham?

Vince [Graham] and I started Newpoint. It was one of the first new urban projects when Seaside and Kentlands were just coming out of the ground. We came from a golf course development background. Living in a 200-plus-year-old town, Beaufort, led to the change. We were seeing how everyone was enjoying this place. The property values were holding up well and it was getting the highest per square foot value of other developments in the area. We just started doing it and we realized the benefits after the fact. The biggest benefit is being able to change with the market. You can traverse price points very quickly and not get locked into a monolithic price. Also, there’s the efficiency. By the time you put in the sidewalks and streetlights, you are probably not saving much compared to conventional development. The bigger benefit is that the cost of maintenance is less. That’s a big benefit of TND— whether you are part of a city and they are doing it, or you are maintaining it yourself.

How did you survive the housing crash and did you do better or worse than other developers in your area?

We did better. We did well by being able to shift gears from building higher-end homes to more cottages. Our multifamily kicked in, and when the price points went down we were able to push more multifamily—including condos and townhomes that were lower cost. We also paid our debt down fairly quickly as we were developing Habersham. A lot of projects and a lot of big developers filed Chapter 11 and restructured after the crash. We were able to sell through it. It wasn’t easy. We paid the bank down as quickly as possible, but we were also still able to sell some product through the downturn because we shifted our price point.

Things have changed in the New Urbanism and the focus has changed. When Habersham was launched in 1999, there were a bunch of projects like it. Now, there’s a lot more infill work being done, more transit-oriented development. What do you think the future is for greenfield TNDs like Habersham?

Back when we started, no zoning for these projects was allowed. You fought tooth and nail to get everything approved. There wasn’t hardly anybody in the country doing rear lanes. From width of lots, lanes, setbacks—everything was a battle. That part is easier now for developers. Millennials moving into cities are mostly single. That’s the cool place to live. When they start to have kids—unless the city schools can do better—there will be a movement to the suburbs again, and the question is where will they live in the suburbs? Are they going to conventional suburban sprawl, or will they have a traditional neighborhood to move to with good schools? If they have urban life without the city school problems, I think that is where the millennials will go. I think the greenfield TND has disappeared a little bit but it will come back on the radar in the years to come and fill in the suburban areas with this kind of development.

The definition of the suburbs will change and they will take on new urban qualities. Everywhere you see infill opportunities in the suburbs. Shopping malls are being converted. Transit stops are being converted to TOD. City life is only for so many people. There are people who want a little more room—a little more green. I’m still talking about small lots, but nothing like living in a multistory building in the city. The millennials are downtown now because they don’t have kids. And it's fun, it's cool, but when the time comes for some of them to move to the suburbs, I hope these [new urban] kinds of developments will be the future.

Looking at Habersham and how the residents have adapted to their environment, are there lessons that new urbanists and those with an affinity to New Urbanism can learn?

Keep it simple. Don’t overdo a lot of things that will require maintenance down the road. Build green parks that are very usable. Kids just love to play in little grass areas. Don’t overdo the amenities. Work with what you have on the site. We see a lot of social connections going on with clubs in Habersham. Nurture that a little bit, but let it evolve organically. Give them a venue to have the meetings and the clubs and let them do it on their own. That stuff takes its own direction. Don’t try to force it.

Your village center is super important. We took the approach “build it and it will come.” It didn’t work out that way. You really have to find the restaurants and pull in the tenants and monitor your village center, because that is the heartbeat of the neighborhood. You may have to “seed” the big events. Put a little money from a marketing standpoint, but the goal is to have it self-sustaining. It needs to pay for itself. We have built some really large events—like a Harvest Festival, 5k race, and a wine and beer tasting event—in addition to a weekly farmers market. It costs something to get them started but now the events make money. The money goes back into the merchant’s council to redo things in the town center.

Some new urbanist projects overdo the events and when the developer leaves it just stops. You are not always going to be there to backstop it—so the goal should be to make it sustainable.