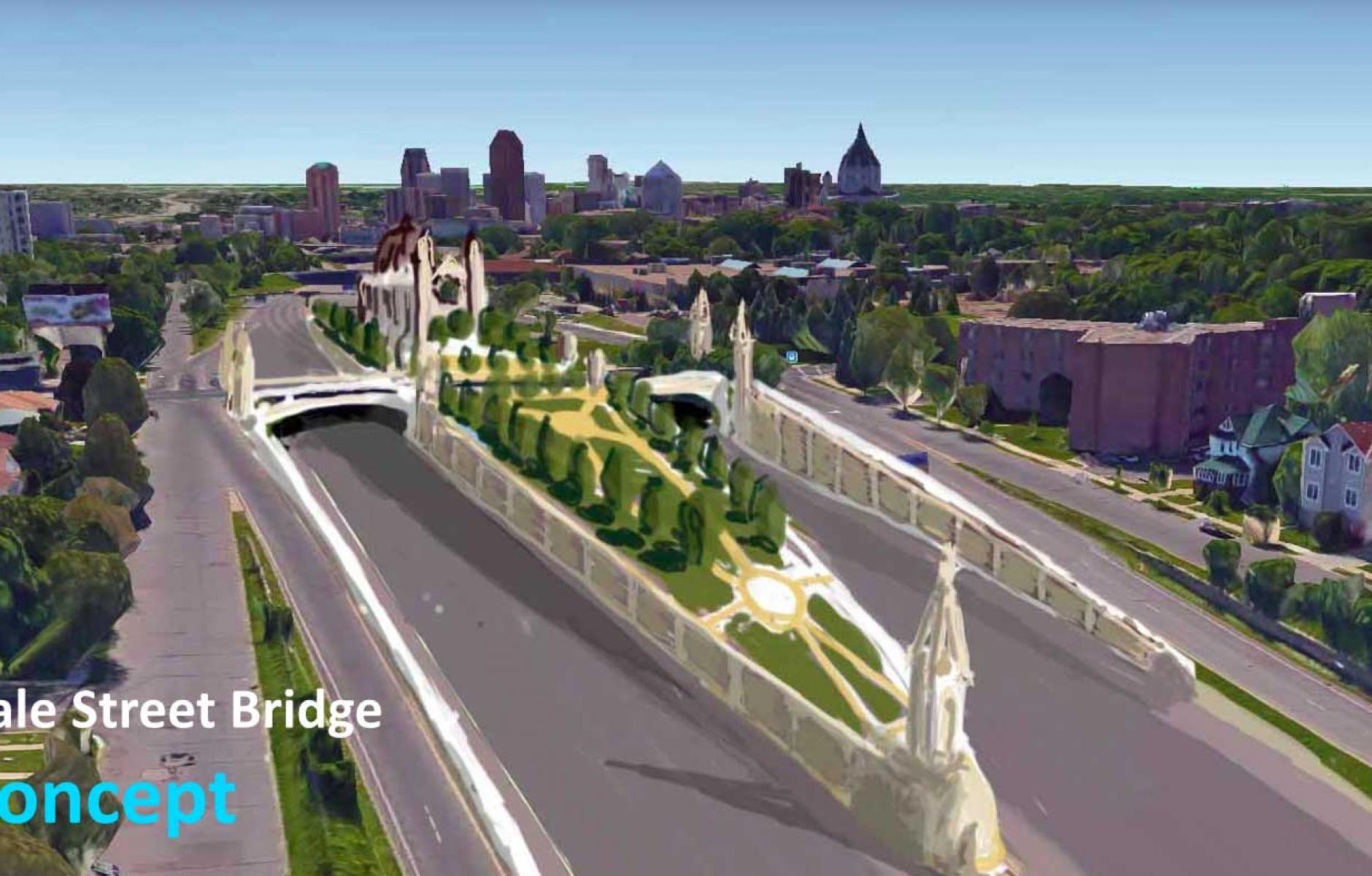 Rebuilding communities bisected by I-94 in the Twin Cities

This article is part of our ongoing coverage of the Ladders of Opportunity Every Place Counts Design Challenge, a program of the U.S. Department of Transportation (USDOT) with design assistance from CNU. Learn more at cnu.org/everyplacecounts.
ROBERT STEUTEVILLE   &nbspAUG. 10, 2016

Complete streets, freeway caps, a trail network, and placemaking were all among the strategies suggested to address the negative impacts of Interstate 94 on two Twin Cities neighborhoods during a USDOT design workshop on July 18 and 19.

Rondo, a neighborhood in St. Paul, MN, was bisected by the highway. Hundreds of homes were demolished during the 1960s construction of I-94 through the historically African-American community, which residents unsuccessfully opposed at the time. Recently, Rondo was the site of protests following a nationally publicized shooting by police. Activists shut down the highway for hours—just a week before the Ladders of Opportunity Every Place Counts Design Challenge came to the Twin Cities.

Led by USDOT with assistance from the Congress for the New Urbanism (CNU), the workshop comprised two days of discussions, bringing together a diverse range of experts and stakeholders, including Ramsey County, Minneapolis, and St. Paul planners and officials, landscape architects, engineers, and transportation professionals. The workshop was the last of four in mid-July—the other three were hosted in Spokane, Nashville, and Philadelphia. All four events focused on reconnected neighborhoods bisected by 20th Century urban freeway construction.

Interstate 94 is more than 50 years old, and it serves a vital transportation purpose—carrying 150,000 to 170,000 cars per day—yet the highway has contributed to decline and disinvestment in Rondo. “Improvements are needed to not only repair the highway and restore mobility, but to also restore the sense of community and belonging once enjoyed in the corridor,” officials noted.

Apologies are due to the residents of Rondo, said St. Paul mayor Chris Coleman. “It’s a first step. This is about rebuilding a community, not just making I-94 pretty.”

A makeover of Dale Street, the primary commercial corridor and heart of the neighborhood, was suggested to spur economic development and make walking and bicycling more pleasant. The CNU design assistance team—led by Peter Park, an expert on reconnecting neighborhoods—proposed a trial road diet to provide on-street parking, separated bike lanes, and tree-lined medians. Parking lots along Dale Street offer the potential for mixed-use revitalization of the area, planners suggested. The bridge across I-94 needs work.

“The Dale Street interchange bridge over I-94 in St. Paul is functionally obsolete,” the city says. “The existing bridge lacks adequate pedestrian facilities as well as adequate accommodations for turning vehicles.”

A redo of the Dale Street bridge—where excess right-of-way could be converted into a mid-freeway green space—was among the thought-provoking visions to come out of the workshop. The drawing is fanciful, but shows the wide possibilities for placemaking along the corridor.

Participants also suggested a new gateway to Rondo and land bridges centered on Victoria Street, which is located five blocks to the west of Dale Street. Land bridges could extend all the way from Grotto to Chatsworth Streets, according to one idea that was presented.

Three miles to the west, next to the University of Minnesota campus, Prospect Park in Minneapolis is cut off from the Mississippi River by I-94. Unlike Rondo, Prospect Park residents of the 1960’s advocated for placement of expressway alongside the neighborhood to provide greater access to job centers through the Twin Cities-area.

However, today the neighborhood suffers from uninviting bridge crossings over the freeway and a lack of connections to riverfront green spaces. Like Rondo, some of the streets and intersections along the I-94 corridor lack a human scale, which aggravate the barriers imposed by the freeway. The intersection at Franklin Avenue and East River Parkway is especially large—designers suggested a roundabout to calm traffic, make crossing easier, and improve traffic flow.

A railway bridge over the Interstate offers an opportunity to connect to green space. “The Prospect Park trail project involves the acquisition of an abandoned railroad corridor between Franklin Ave SE and 27th Ave SE, and the construction of a multi-use trail,” the city notes.

Words such as “barrier” and “congested” were used to describe the corridor. Meanwhile, workshops attendees expressed hopes that the area’s future could be “connected,” “multi-modal” and an “opportunity.”

Participants sought to “reconnect the communities through equitable investment and a multi-modal system to cross I-94 and use active community engagement to re-imagine and reconnect communities and to create vibrant and livable places of neighborhood gathering and cultural celebration.”