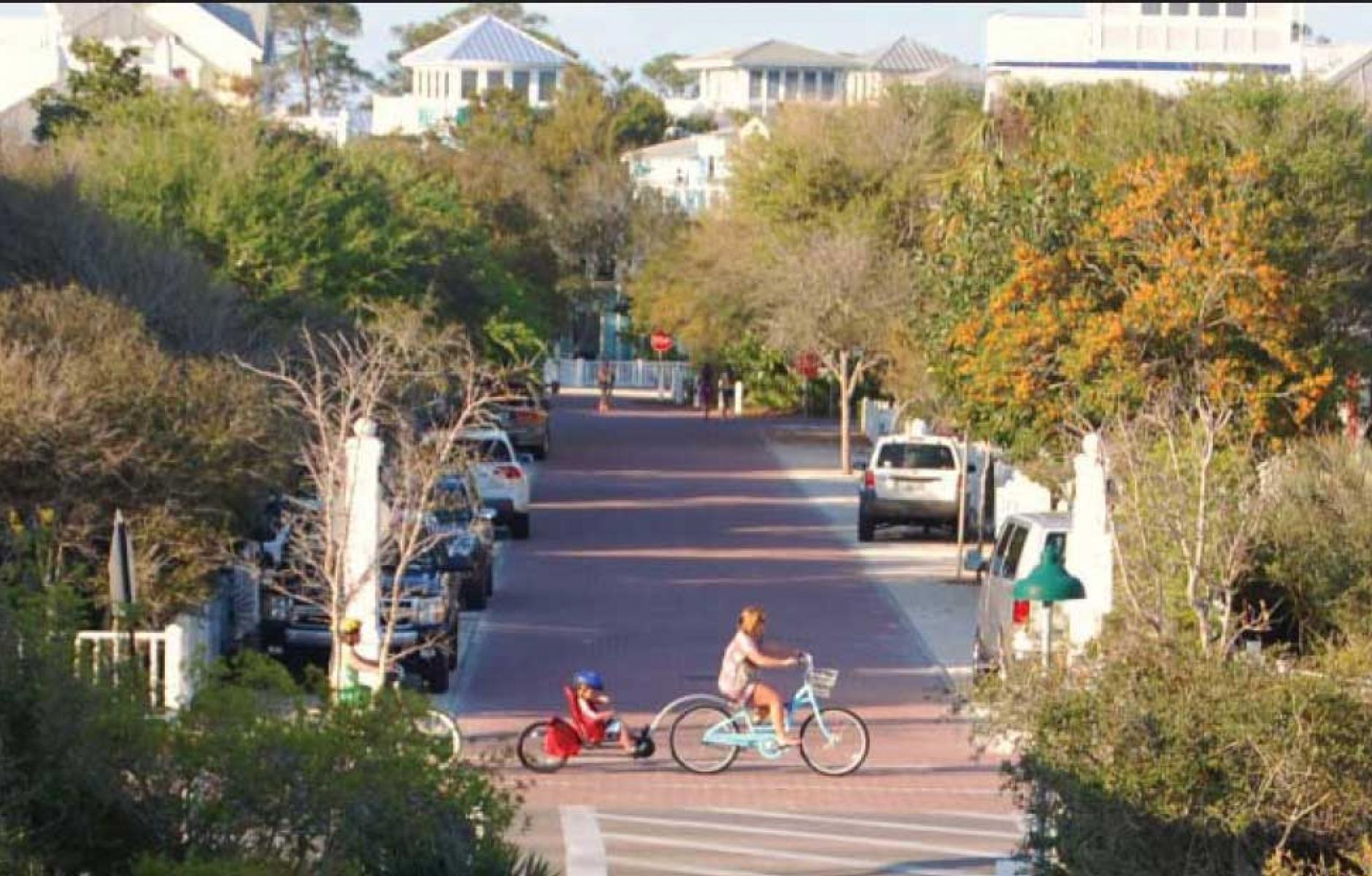 Children in the street in Seaside, Florida. From Complete Streets Implementation Plan
Transportation

Florida recently adopted a comprehensive statewide plan to implement Complete Streets. I'll go out on a limb and say this plan is needed.

Florida ranks first in the US in pedestrian fatalities nationwide. Florida is also the most dangerous state for bicyclists, according to the Centers for Disease Control. "Its fatality rate of 0.57 per 100,000 population is more than double the national average of 0.23 per 100,000," writes Bruce Stephenson, director Environmental Studies and Sustainable Urbanism at Rollins College in Winter Park, Florida.

Florida has more than double the annual traffic deaths overall of New York State (2,445 versus 1,200 in 2010), with nearly equal population.

Florida's metropolitan regions were built in the era of "forgiving design," the theory that wide-open thoroughfares in urban areas are safer because they eliminate obstacles near the roadway. As studies have shown, this theory increases injuries and deaths, because drivers are encouraged to speed and be less careful. It also suppresses walking and bicycling and makes dense, walkable places difficult to build. Only 1.5 percent of Floridians walk to work, and 0.7 percent bike to work, which indicates the low level of transportation options in the Sunshine State.

Among the top 10 states in population, Florida is by far the most the most "urban" according to the Census Bureau. About 14 percent of Florida's land is "urbanized," and that's where 91 percent of the population lives. But that urbanization is mostly conventional suburban, because the vast majority occurred since 1950 when automobile-focused street design became the standard.

Yet the state is making progress lately—certainly Florida Department of Transportation's Complete Streets Implementation Plan, written with the help of Smart Growth America, is a step in the right direction. The plan goes beyond what many other states with Complete Streets policies have done—which is very little in the way of implementation.

This document recognizes that FDOT's culture must change and the manuals and procedures must be revised from top to bottom to implement Complete Streets. Effective Complete Streets means narrower lanes, more street trees, intersections that are human scale, on-street parking, bike lanes, sidewalks, crosswalks, and other traffic calming measures in mixed-use urban places.

A number of important changes are emphasized:

• The plan strongly recommends the use of "target speed" as the basis for street design, which is a less "forgiving" approach for motor vehicles. Typically, streets were designed for higher speeds than the speed limit, encouraging people to speed.

• "Context-sensitive" design is promoted. This would be a very good change if "future context" is recognized, based on a municipal comprehensive plan. Many municipalities have plans for making specific places more walkable. The streets can either prevent or promote that that change. FDOT should make sure that context-sensitive design is an asset to making a place more walkable.

• Use of the urban-rural Transect is recommended, which creates a basis for connecting the plan to new urban principles.

• The document recommends looking at "return on investment" of Complete Street projects, which brings economics into the thinking of FDOT. This is long overdue: Streets are not just for transportation, they are vital economically and socially. They set the foundation for diverse places, or monocultures. Anything that gets DOTs to look at broader roles for streets will help.

• FDOT recommends incorporating a Complete Streets approach throughout the Florida Green Book, which is the primary manual for the state's transportation engineers. The Green Book currently has a Traditional Neighborhood Development chapter, but that "feels like the exception," the plan says.

It is clear from reading Complete Streets Implementation Plan—and probably few people will do this outside of FDOT—that turning the department around is an enormous task. FDOT is a big bureaucracy with layers of practices and procedures built up over generations.

The demand for safer and more human-centered places requires the kind of comprehensive change that is envisioned by the writers of this plan. However, I wonder about statements like this:

"Modify standards for SIS (Strategic Intermodal Systems) facilities to allow more design flexibility when facilities are located in urban areas." More flexibility gives the opportunity to design streets that are very bad as well as very good. Given the training and track record of transportation engineers in Florida, which is the more likely?

Florida has among the worst roads in the nation, by Complete Streets standards. The Sunshine State hasn't done anything that differently from anybody else—but they just have done more of it. No single document will turn this around, but the Complete Streets Implementation Policy is an impressive effort toward more diverse thoroughfares with a wider range of mobility.